Please find the latest COVID-19 updates and information from The City of Boston.

RACISM AS AN EMERGENCY AND PUBLIC HEALTH CRISIS

The City of Boston has 13,186 positive cases of coronavirus (confirmed and presumptive). So far, 8,214 of these 13,186 residents have fully recovered. Unfortunately, there have been 682 COVID-19 related deaths in Boston.

The City posts race and ethnicity data for deaths, as well as for confirmed cases here.

The Boston Public Health Commission will be providing the updated total of cases in Boston residents as it is received from the Massachusetts Department of Public Health. Information can be found at boston.gov/coronavirus or bphc.org.

The City of Boston has two dashboards to provide statistics on COVID19 cases in Boston and throughout Massachusetts. View them here.

The City of Boston has a free texting service to provide daily updates and information about the coronavirus. Text BOSCOVID to 888-777 to opt-in for English. Language and communications access remains a priority for Mayor Walsh, so this text service which was available in Spanish, Haitan Creole, French, Cabo Verdean Creole, and Portuguese, now includes Somali, Chinese, Arabic, Vietnamese and Russian.

Updates in 10 total languages can additionally be accessed through boston.gov/coronavirus#multilingual-help. Each language has its own page and hosts multilingual print materials distributed citywide.

RACISM AS AN EMERGENCY AND PUBLIC HEALTH CRISIS

The Mayor announced an initial set of actions for racial equity:

June 17 is a Census Day of Action! A day meant to highlight the importance of participating in the 2020 Census. The 2020 Census is a way to directly increase community power. It will impact our daily lives for the next 10 years. Many of Boston’s communities are at risk of an undercount. We need a complete and accurate count because all of Boston deserves to be seen, heard, and invested in.

Now more than ever, we are reminded of how critical this work is and the crucial role it plays in the social justice movement.  An immediate action one can take to help the ongoing COVID-19 relief efforts and catalyze the redistribution of resources into historically marginalized communities, is to fill out the 2020 Census.

The Boston Public Works Department is adding curb extensions and installing a rectangular rapid flash beacon at the intersection of Arlington Street, Isabella Street, and Melrose Street in Boston Proper to improve pedestrian safety. Check out how the intersections will change in the graphic shown below.

At the intersection of Bellevue Hill Road and LaGrange Street in West Roxbury, the Boston Public Works Department is removing a traffic island and adding a curb extension to reduce vehicle speeds and shorten pedestrian crossing distances. Check out how the intersection will change in the graphic shown below.

The Boston Public Works Department is modifying the geometry of the Canterbury Street and Bourne Street intersection in Jamaica Plain to improve vehicle visibility and shorten crossing distances for pedestrians. Check out how the intersection will change in the graphic shown below.

At the intersection of Chestnut Hill Avenue and Winship Street in Brighton, the Boston Public Works Department is removing a pedestrian island and adding a significant curb extension to greatly reduce crossing distances and improve pedestrian safety.  Check out how the intersection will change in the graphic shown below.

The Boston Public Works Department is removing three traffic islands at the intersection of Columbia Road, Michigan Avenue, and Old Road in Dorchester while adding substantial curb extensions to reduce vehicle speeds and pedestrian crossing distances. Check out how the intersection will change in the graphic shown below.

The Boston Public Works Department is adding curb extensions at the intersection of East Cottage Street, Norfolk Avenue, and Humphreys Street to improve pedestrian safety. Check out how the intersection will change in the graphic shown below.

Error: (#10) This endpoint requires the 'manage_pages' or 'pages_read_engagement' permission or the 'Page Public Content Access' feature. Refer to https://developers.facebook.com/docs/apps/review/login-permissions#manage-pages and https://developers.facebook.com/docs/apps/review/feature#reference-PAGES_ACCESS for details.
Type: OAuthException
Code: 10 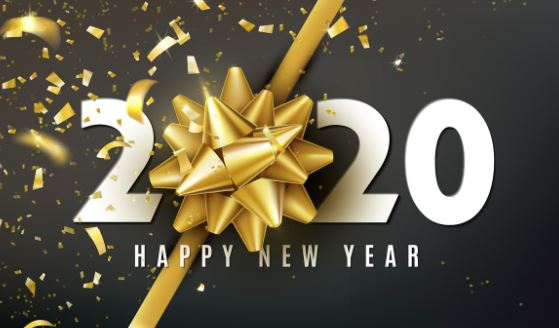 Newbury Street @NewburyStreet1
Thursday, July 11th, 2019 at 10:04am
This Sunday, #NewburyStreet is the place to be! #OpenNewbury https://t.co/z8Q8yYAieo
View on Twitter

Neighborhood Services @COB_ONS
Did you hear the news? @marty_walsh is bringing back #OpenNewburyStreet again! Join us this Sunday as we enjoy the summer heat in a pedestrian friendly zone! 10AM-6PM. https://t.co/AMRv0jiDxl
1
4

Newbury Street @NewburyStreet1
Thursday, July 11th, 2019 at 9:50am
This Sunday, #NewburyStreet is the place to be! https://t.co/IzsSusOiEc
View on Twitter 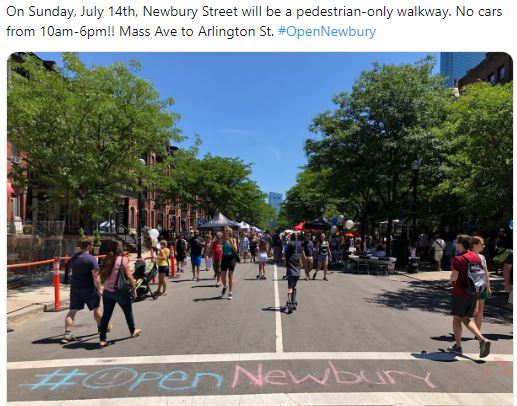 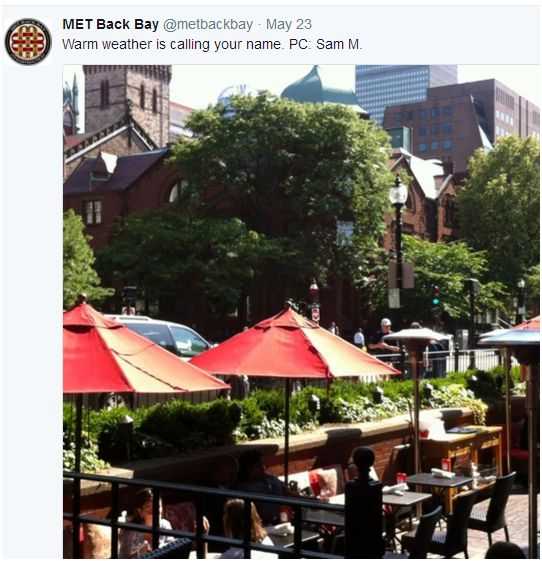 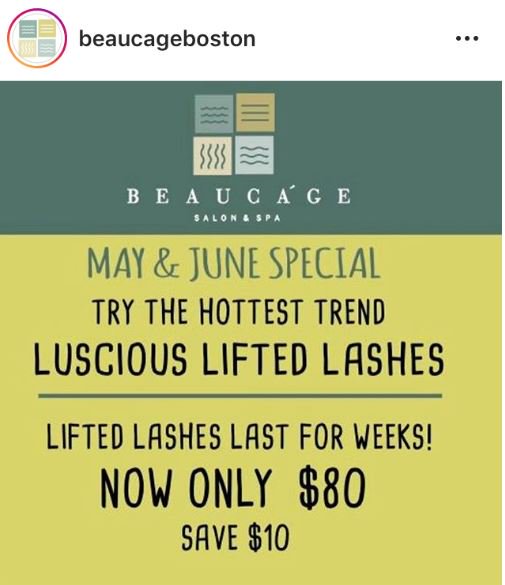 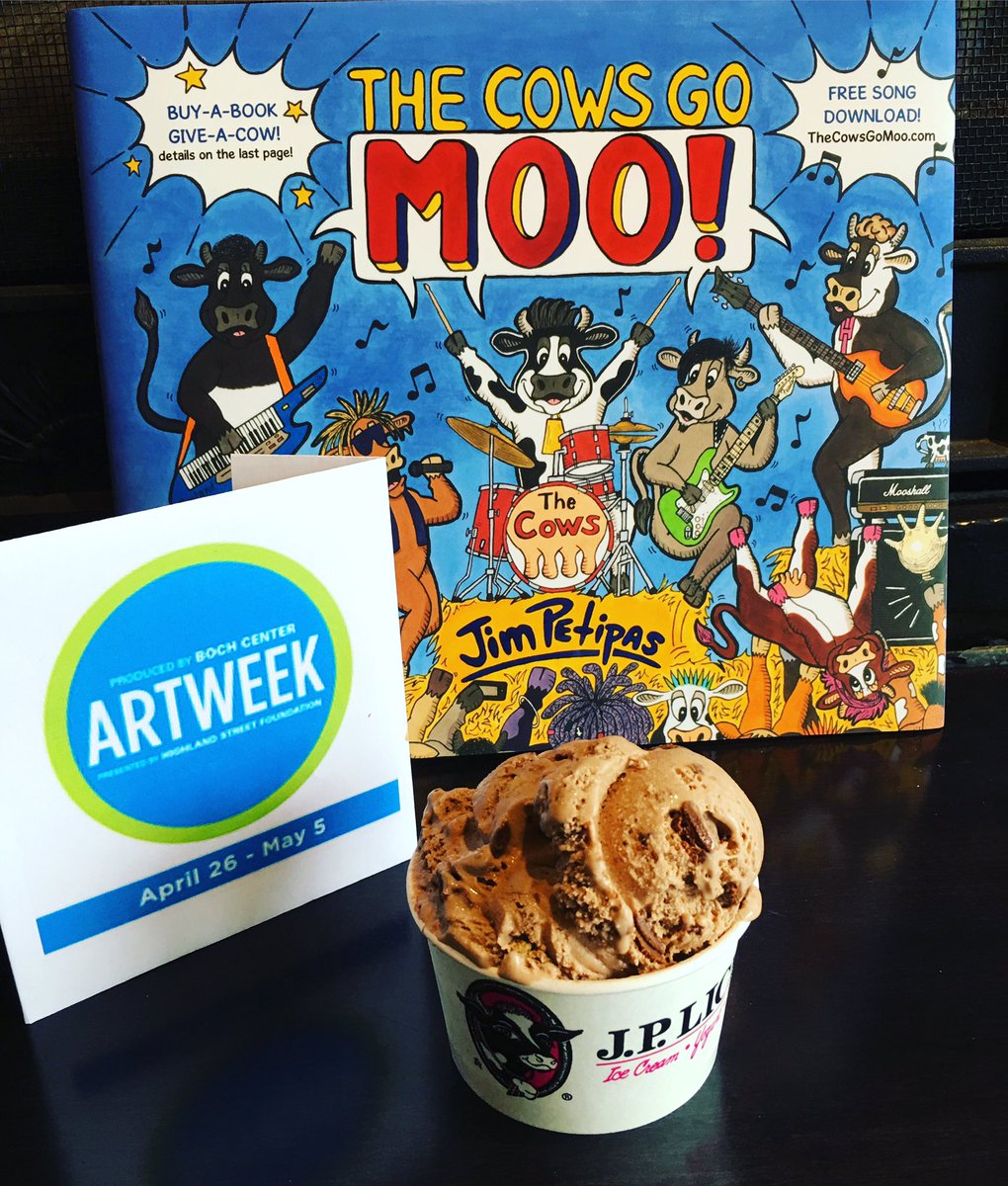 jplicks @jplicks
Art Week has begun! And we're thrilled to take part with #storyhour from @TheCowsGoMoo1 Reading, singing, and drawing- what a great way to spend a weekend afternoon as a family! #icecream #familytime @ArtWeekMA @NewburyStreet1 https://t.co/gRPalckF3J
0
0

Newbury Street @NewburyStreet1
Thursday, April 25th, 2019 at 10:14pm
The @NewburyStreet1 and our members are happy to support the wonderful work of the @WLPBoston and their volunteers! https://t.co/IUQN95bxZo
View on Twitter 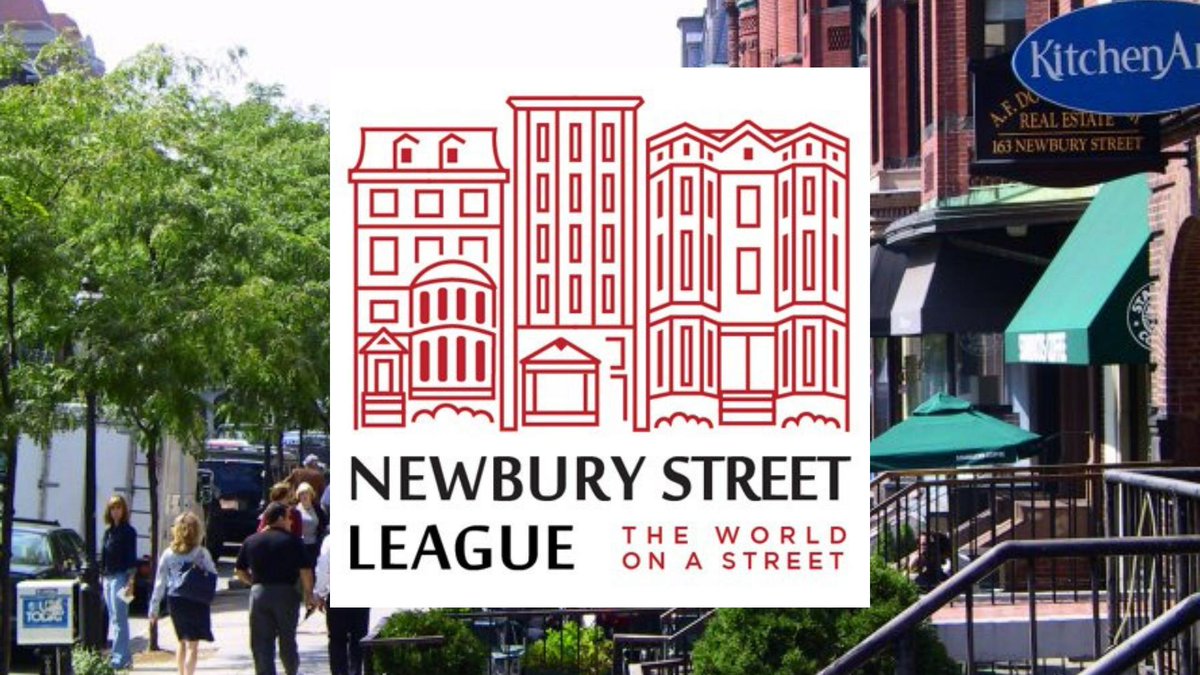 Women's Lunch Place @WLPBoston
Our volunteers are in for an amazing celebration tonight thanks to @NewburyStreet1 and its incredible members who donated wonderful prizes for our raffle. WLP is a member of NSL, and we love that they embody the spirit of neighbors helping neighbors! 💚💛 https://t.co/d1jTs7hn8D
0
3

In reply toWomen's Lunch Place
Thursday, April 25th, 2019 at 10:13pm
@WLPBoston The @NewburyStreet1 and our members are happy to support the wonderful work of the @WLPBoston and their amazing volunteers! #NewburyStreet
View on Twitter
0
1

In reply toWomen's Lunch Place
Thursday, April 25th, 2019 at 4:16pm
@WLPBoston So happy to support @WLPBoston and your volunteers! Keep up the great work!
View on Twitter
0
1 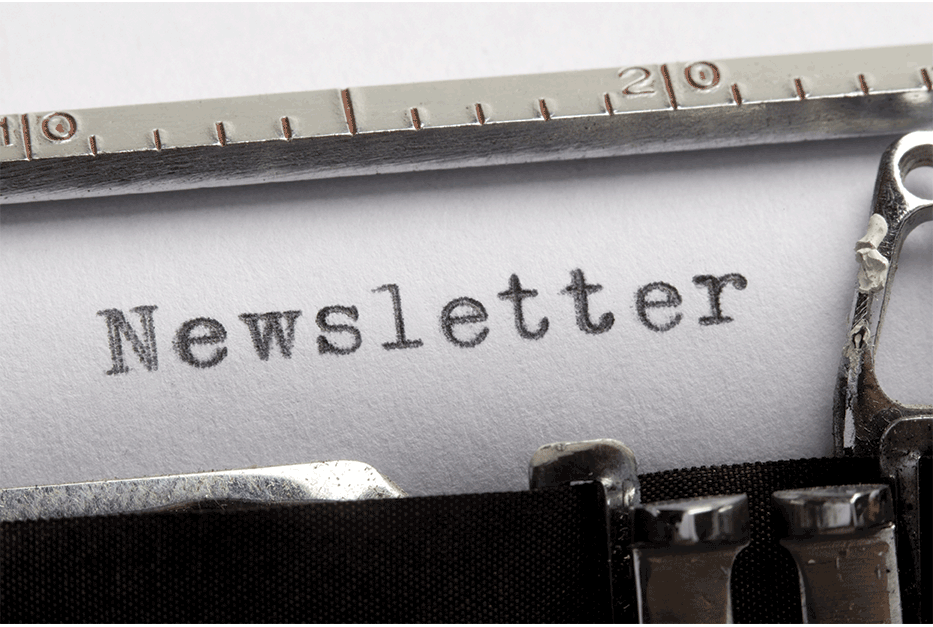 Newbury Street @NewburyStreet1
Thursday, April 11th, 2019 at 11:15am
Looking forward to all the exciting events happening during @ArtWeekMA on #NewburyStreet! https://t.co/BVe5v3AZPh
View on Twitter 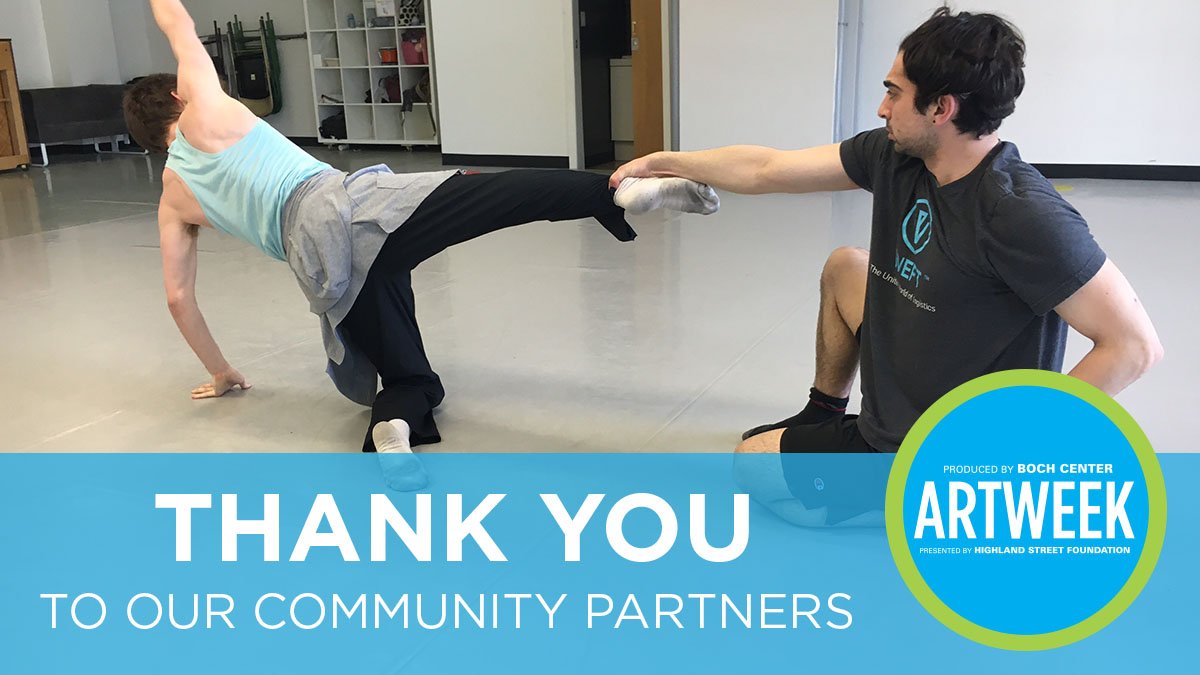 ArtWeek @ArtWeekMA
We want to extend our thanks to these partners, stretching across our creative commonwealth! 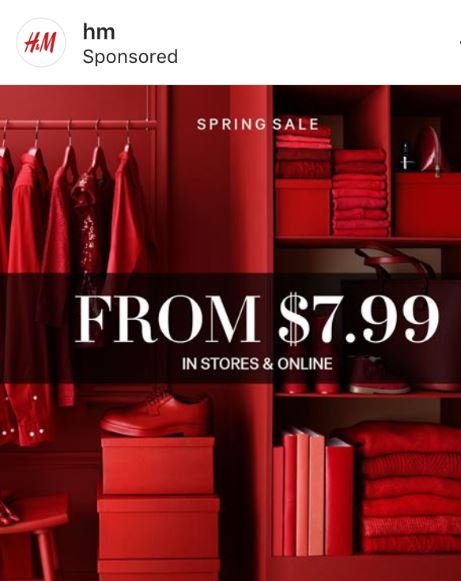 In reply toMandarin Oriental
Sunday, April 7th, 2019 at 12:41pm
@MO_BOSTON All of us on #NewburyStreet will be here to Welcome you!
View on Twitter
0
0
Follow @NewburyStreet1